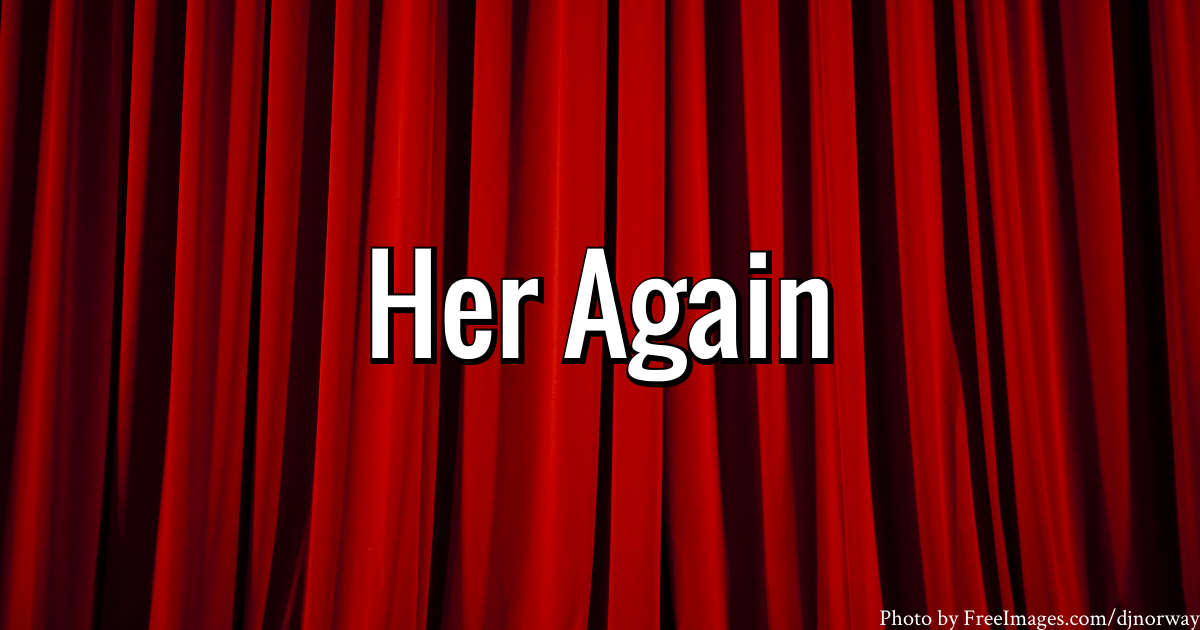 Her Again is the charming and emotional biography that details Meryl Streep’s early life and rise to fame. Michael Schulman artfully weaves together her story in a way that will enchant readers.

Meryl Streep grew up in Bernadsville, New Jersey. In high school she developed her talent and passion for acting. She left high school and entered an all girls college, where she flourished without the distraction of boys. However, in her junior year the school started allowing boys to enroll, causing tension among students. Meryl continued to act, and enrolled in acting school at Yale. Her fellow students looked up to her talent and versatility in the roles she played. This versatility would follow her throughout her career, as she slipped easily in and out of roles.

After college, she began to act in more plays. She took many Shakespearean roles, and in one of those roles she met John Cazale. They fell deeply in love, and continued to act together. When John fell ill with lung cancer, Meryl stood by his side until the end. In the aftermath of his death, her career as a movie actress began to take off. Only six months after his death, she married Don Gummer. Although the wounds of losing John had not healed, she found something enduring in Don that she knew was right. She and Don have four children and remain married to this day.

Schulman painted a bright picture of a brilliant woman.

Schulman’s excellent writing made it easy to be impressed by Meryl Streep’s talent. He wrote about her acting skills and their development in a way that made them come to life, even without a screen. Most interestingly, he wrote about Meryl’s shunning of method acting. Instead of conjuring up her own pain to get to a certain place while acting, Meryl preferred to act as a reflection of life as she saw it.

Schulman also gave the reader a glimpse at Meryl’s fire. Meryl was influenced heavily by second-wave feminism, and has always been vocal in those beliefs. She believes that both men and women should be able to step out of the roles society puts them into. Meryl has also been an advocate for herself and her acting. On one film she was offered, some scenes called for her nudity. Instead of merely turning it down, she asked if the male lead would also be showing the same amount of nudity. The part was offered to someone else.

Schulman captured her fun personality along with her strength.

Meryl has a lot of quirks, and Schulman captured them beautifully within the pages of the book. He wrote about her vocal desire for personal space and privacy, especially after having her first child. She loves pearls and a jacket she’s had since college. If she could do anything, she would act in plays instead of movies. And despite her fame, she still has some insecurities about her appearance.

Most interesting to me, though, was her marriage to Don Gummer. She had met and married him in a six month period. Although her friends and family wondered if she had lost her mind, she had fully thought through the marriage and it has become one of the most enduring marriages in Hollywood. Because I also had a hasty marriage, I am always fascinated by what goes into those decisions. Ultimately, I believe that when you know you’ve met the person you’re meant to be with, you know it’s them and you know when the timing is right. That timing might be mere months (to the dismay of family and friends) or that timing might be years. I do know that it didn’t feel fast to Grant and me, and I doubt it felt fast to Meryl Streep and Don Gummer.

Her Again was a great read with great writing. Michael Schulman brings to life the story of Meryl Streep’s rise to fame in a very lively and linear way. My only complaint is that it did not cover more of Meryl Streep’s life, although it is a very good “rise to fame” tale. Although I have seen Meryl Streep in a few movies and enjoyed her performances, I would not call myself a “fan,” although this book certainly did a good job convincing me that I should be. For those who love her, this is a must read.