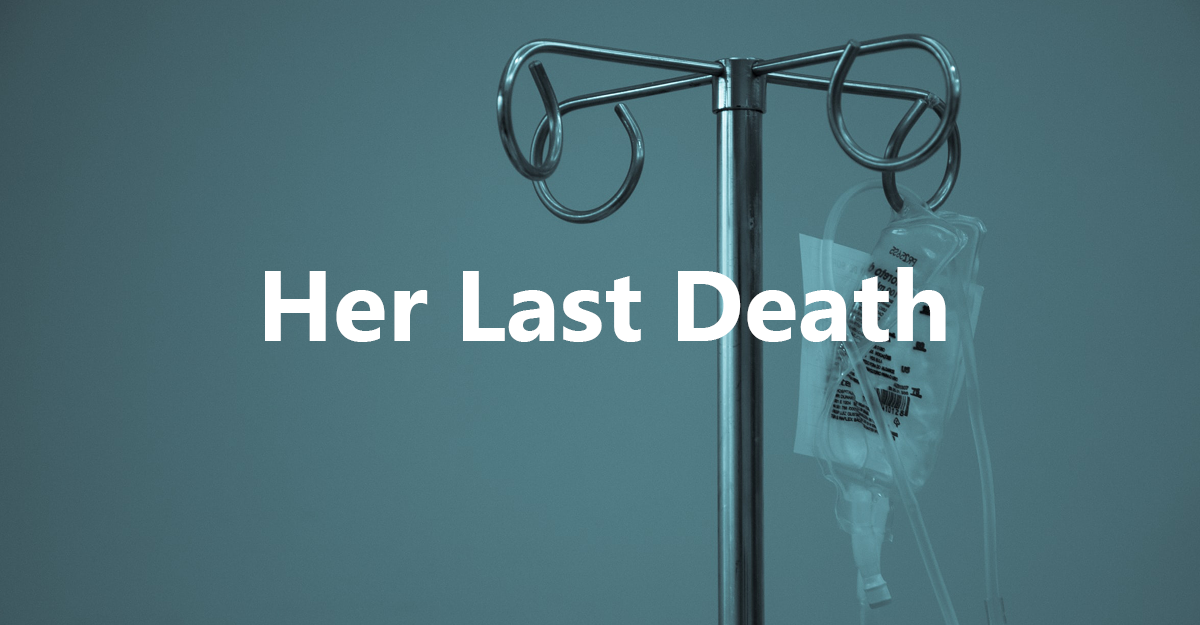 When I stumbled upon Her Last Death, I was fascinated by the book’s description. In the short blurb I read, I discovered that it was a book about a woman who decided against seeing her mother on her deathbed. Susanna’s mother lived an excessive lifestyle marked by addiction and abuse. After saying goodbye several times to a mother who was always “dying,” Susanna had exhausted her capacity for goodbyes.

Susanna was the older of two daughters. Susanna’s grandparents supported her, her mother and her sister after their parents divorced. Susanna’s mother was promiscuous and addicted to cocaine. When she was still in middle school, Susanna’s mother offered her cocaine for the first time. Throughout her childhood, Susanna’s mother encouraged her to engage in sexual behaviors and abuse substances.

Addiction and promiscuity led Susanna’s mother to a life in constant crisis. As a habitual liar, she constantly told her daughters things that weren’t true. In one incident, she told her daughters that they were going to take a road trip because she had just been diagnosed with cancer and only had a few weeks to live. On this “farewell tour,” Susanna and her sister grieved the impending loss of their mother. This and other similar events became a constant drain on Susanna’s emotions.

When the news came that Susanna’s mother was in an accident, Susanna chose not to visit her in the hospital. She had already grieved her mother’s death several times and didn’t have the emotional capacity to do it again.

Susanna’s mother encouraged her promiscuity. After her mother pressured her to start having sex, Susanna had her first sexual encounter with a teacher. The affair with her teacher lasted several years. When the relationship ended, Susanna made it her personal goal to sleep with as many people as possible.

Despite her goal, Susanna eventually married and settled down. Through a healthy marriage relationship, she learned the value of vulnerability and faithfulness. Despite her husband’s kindness, she struggled against the thought processes instilled by her mother.

I come from a long line of alcoholics. Alcoholism is something I have always known. However, I don’t drink as an adult. Part of this is because I’m a pastor in a “dry” denomination. A large part, however, is because I know how dangerous one sip of alcohol could be for me. One sip is all it would take for me to fall down the rabbit hole of addiction. I’ve struggled against the temptation to drink throughout my entire life.

As I read Susanna’s memoir, it was easy for me to judge her behavior. There are things she did that seem unimaginable to me. Yet when I consider her childhood and the horrors inflicted by her mother, I see how much she’s improved her life since her childhood.

Writing – Susanna’s writing style was erratic. However, the style fit well with the subject matter. The content was still understandable in the midst of the erratic writing.

Story – The story jumped between events without regard for chronological order. However, the erratic plotline worked, painting a picture of what childhood looked like when marked by drug abuse and madness. Her memoir aimed to explain why she didn’t go to her mother’s bedside and she met that aim.

Mature Content – There is a LOT of mature content. This book contains drug use, explicit language, and graphic descriptions of sexual acts.

Likability of Author – Despite some of her bad actions, the author was likable. At the core, she desired to do the right thing. Although her mother mocked her for being a “goody two-shoes,” I commend her for wanting to improve herself.

Her Last Death provides an emotional memoir with an interesting storyline. It provides a glimpse at what it looks like to grow up with an abusive mother. This book is very graphic, however, so I cannot recommend it for young readers or for those who are sensitive to these things. Although I typically have a good stomach for graphic content, I personally struggled with portions of the book. If you’re unsure about reading a book with graphic content, The Glass Castle may be a better fit for a similar story.