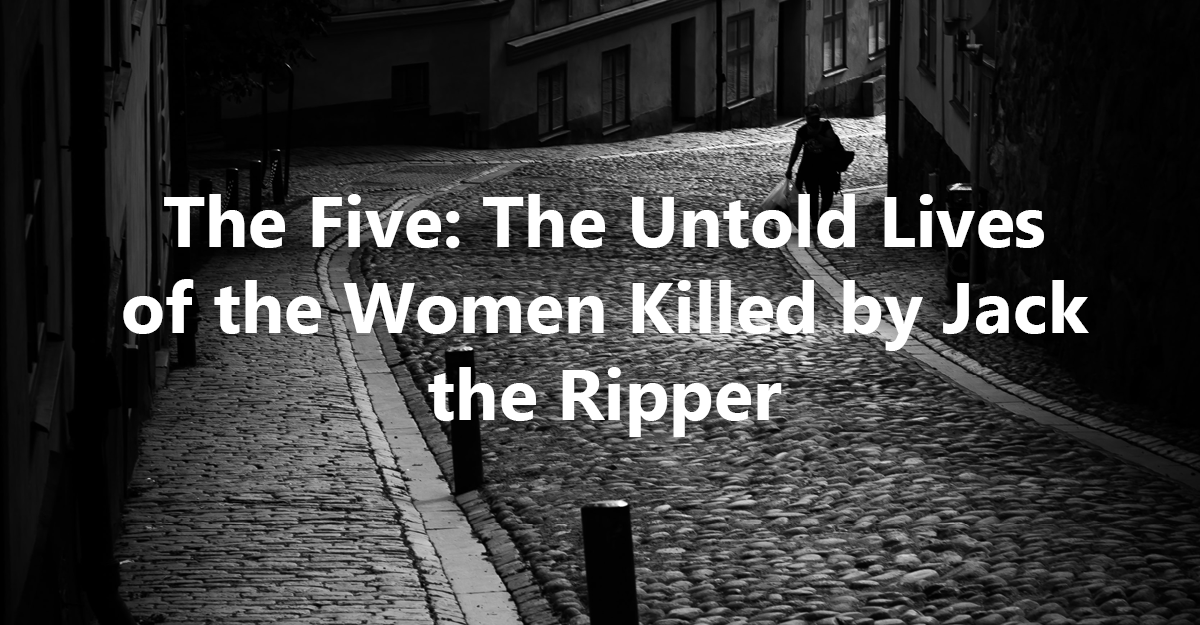 It was by chance that I stumbled upon this book, which was in my recommended reads on Scribd. I wanted to listen to an audiobook to pass the time while I was in bed with a migraine. I found myself immediately immersed in the lives of Jack the Ripper’s victims.

Ask anyone what they know about Jack the Ripper or his victims, and almost every single person will mention the fact that he killed prostitutes. But what would happen if I told you that he did not, in fact, kill prostitutes? Only one of his victims was an active prostitute at the time of her murder. What these five women have in common, in actuality, was the fact they were sleeping on the streets.

This book traced the lives of these five women. Mary Ann Nichols, Annie Chapman, Elizabeth Stride, Catherine Eddowes, and Mary Jane Kelly all lived lives filled with joys and sorrows before the fateful nights each of them met with Jack the Ripper.

These women had an education, often beyond what was typical of the time. After having an affair with their neighbor, Mary Ann Nichols’ husband cast her onto the streets. Husbands, siblings, and other relatives cast out some of the other victims for no other reason than their alcohol addiction

The five canonical victims of Jack the Ripper were not all prostitutes. These women all wandered and slept on the streets at night, due to poverty or circumstance. Jack the Ripper killed the last victim, Mary Jane Kelly, in the room she rented for the night. The murderer chose to kill women who were defenseless and most likely asleep.

For three of the victims, there is no evidence that they ever participated in prostitution. They were homeless and some of them were alcoholics. However, none of the people who knew these women knew of any prostitution. One of the women had been a prostitute but had turned away from prostitution for some time before her death. Only the last victim, Mary Jane Kelly, was a prostitute at the time of her death.

During the late 1800s, most middle and upper-class people viewed a connection between alcoholism and loose sexual morals. Because prohibition and anti-alcohol movements were common, people looked down on those who chose to drink, viewing them as degenerates.

At that time, people assumed that any woman who was drinking was probably also selling herself. This assumption was stronger if the woman was living on the streets.

Because people saw a correlation between alcoholism, homelessness, and promiscuity, it was a natural assumption that the women killed by Jack the Ripper were prostitutes. The print media went to great lengths to paint these women as prostitutes. This was easier than admitting that any woman was at risk if she was out at night.

The workhouse was a place where a woman could get a bed for the night and some food in the morning. Unfortunately, these charities created terrible living conditions that often drove women out of their care. When a woman entered the workhouse, she surrendered all of her belongings. With no possessions to her name, she would leave the workhouse poorer than she was before.

Many women had no choice but to choose between the terrible conditions of the workhouse and the instability of life on the streets.

Writing – The author provided a well-researched and beautifully written book. The author shared the stories of these women in a way that kept me reading.

Story – This was a compelling, eye-opening account of how the victims of Jack the Ripper have been misrepresented for over a century. It’s horrifying how this poor representation has influenced the opinions of people for so long.

Mature Content – There are sometimes graphic descriptions of life on the street. The book also explores issues of sexual morals and prostitution. While not overtly graphic, this may not be a suitable book for younger teenagers.

Likability of Author – The author, as a biographer, was not a character in the book itself. However, she did a good job of presenting the lives of these women and her opinions on their treatment in a way that helped the reader identify with them.

BONUS Audiobook Review – The audiobook was read by a woman with an English accent, which helped to transport me to England in the late 1800s. It was read in a way that kept me immersed in the story and helped me grasp the details.

The Five: The Untold Lives of the Women Killed by Jack the Ripper is an amazing biographical look at the lives of these five women. If you’re a fan of true crime or crime history, this can be an exceptionally good read. Because this book explores the lives of five different women, it gives the reader smaller stories within the larger narrative of Jack the Ripper’s crimes. This made it a great read during my downtime on vacation and would make it a great read for anyone looking to read a little bit here and there.