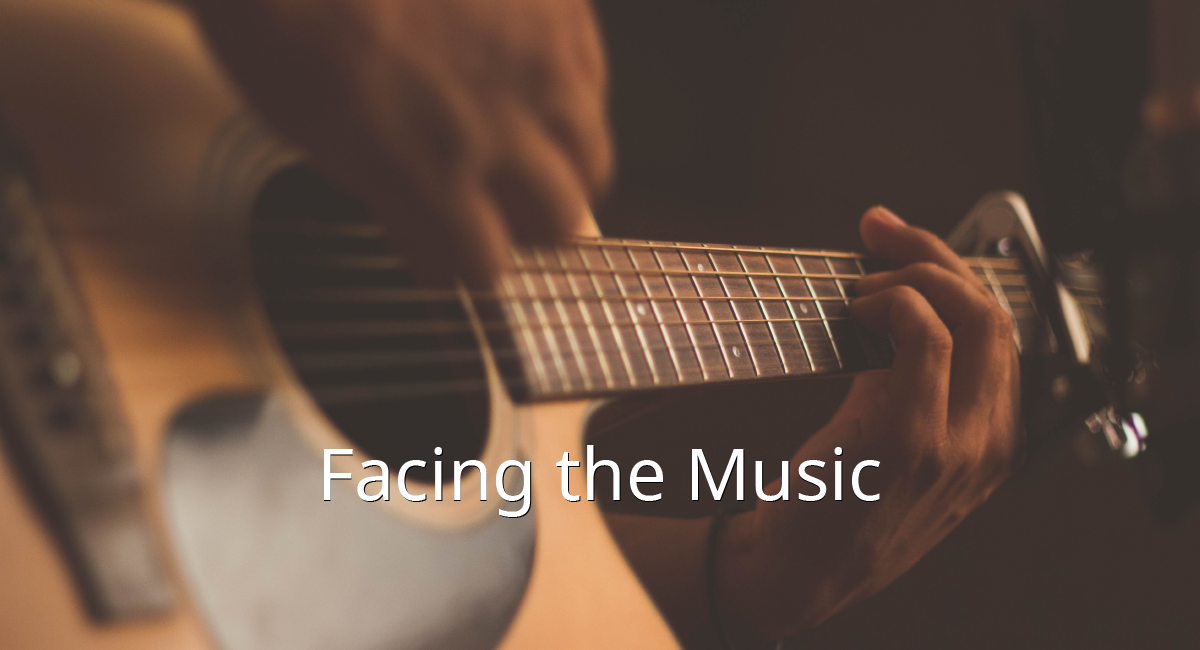 I was looking for another memoir to read when I stumbled upon Jennifer Knapp’s memoir, Facing the Music. Jennifer was a contemporary Christian artist who was popular when I was a preteen. After a few years of recording with TobyMac’s record label, Jennifer Knapp seemingly dropped off the face of the earth. Her memoir shares that story.

Jennifer Knapp’s early life was fraught with difficulty. After her parents’ divorce, she lived with her father and step-mother, who was an abusive force in her life. To escape the difficulties at home, Jennifer poured herself into her love of music. She learned to play multiple instruments and ended up with a music scholarship.

To cope with stress, Jennifer became steeped in alcoholism and promiscuity. A concerned Christian classmate eventually led Jennifer to Christianity. Shortly after Jennifer became a Christian, her talent for music put her in the spotlight. A Christian friend helped her get music gigs, although she did not especially enjoy performing music. After landing a record deal, Jennifer found herself on the road constantly, with little time off. The pressures of being a Christian artist continued to mount until Jennifer left it all behind.

In the aftermath of her experience, Jennifer admitted to herself that she was gay. She began a relationship with her road manager, Karen, and the two of them moved to Australia. After years of shutting music out of her life, Jennifer faced the painful memories and ventured back into the music industry, this time as a secular performing artist.

The Pressures of the Christian Music Industry

Any person in the public eye is going to face pressure. But in the contemporary Christian music industry, the pressure is intense and shrouded in spiritual language. Because Jennifer was a single woman traveling around the country, she was expected to stay in the homes of local Christians as a means of keeping her accountable to Christian purity standards.

Whenever she slipped up in the smallest of ways, she would receive criticism for “not being a good Christian.” In one instance, she was too tired after travelling to go rafting with her host family. They, in turn, contacted her boss to express their concern over her un-Christian behavior.

Jennifer took note early on that homosexuality would not be tolerated in the Christian community where she found herself. Because of this, she did her best to not feel attraction toward anyone. When she began to form feelings for her road manager, though, she realized she needed to get away from the Christian music industry. Although she still maintains faith in the teachings of Jesus, she struggles with some of the teachings of the institutionalized church.

I related to Jennifer’s experience of pressure from the Christian community. As a pastor, I am expected to act and behave in a way that is pastoral. To an extent, that’s a good thing: it wouldn’t be good if I were out getting drunk or sleeping around or acting violently. But the pressure and the criticism leave no room for mistakes, real or perceived. Over time, that pressure adds up.

I was recently listening to a lecture by Terry LeBlanc, who said, “The curse is destroyed by Christ, but the church has picked it up!” The divisions created by the world are abolished by Christ, but sometimes Christians become a plague of their own.

Don’t get me wrong: I love the church and I love my Christian friends. After all, I am a Christian! But the church has all too often led with condemnation and judgment when Scripture asks us to drop our stones and extend grace. There should always be room for hard conversations, but when we are constantly looking for failures or picking apart the actions of another person, we miss opportunities to build meaningful relationships.

The church values extroversion, to a point where we are doing a major disservice to introverts. We must have grace and understanding for our brothers and sisters who gain energy from time alone. In high school and college, the times I have received the harshest criticism were times that I showed my more introverted side. Although I am usually loud and outgoing, my hobbies are largely solitary ones. In taking this time away from people, I was met with condemnation. I often worry about the criticism my more introverted friends and family receive from church communities.

Writing – I loved Jennifer’s writing. It was laced with humor, which showed off the fun sides of her personality.

Story – This was an interesting story that had me captivated from the start. I enjoyed the behind-the-scenes look at the contemporary Christian music industry. Jennifer’s retelling really allowed me to feel her emotions.

Mature Content – There was a small amount of profanity and non-graphic descriptions of promiscuity and alcohol addiction.

Likability of Author – I found Jennifer to be VERY likable. I liked her sense of humor and perspective.

BONUS Audiobook Review – The audiobook was read by Jennifer, so I got a better glimpse of her personality. I always enjoy hearing the authors’ inflexions as they reflect on the events of their lives.

This was an amazing, yet heartbreaking read. Jennifer forces Christians to think about their criticism of other believers, especially those in positions of leadership. Her love of music and her desire to share her heart come across throughout the entire book. For those disillusioned by the church, Jennifer’s book provides a voice to some of those frustrations.