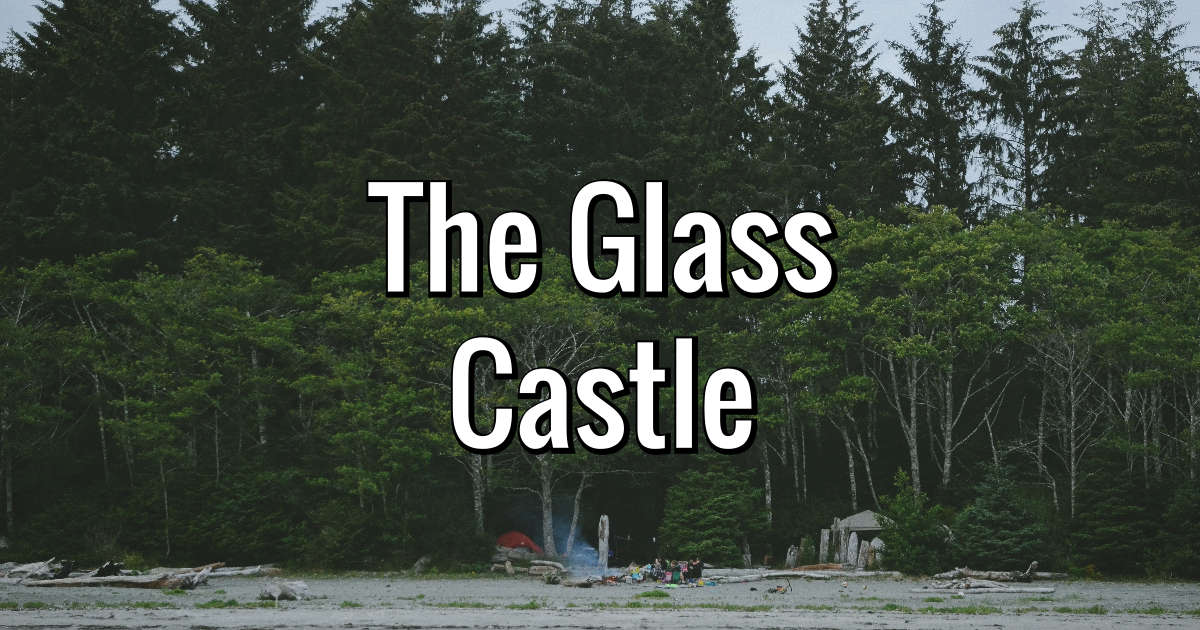 When I first saw previews for The Glass Castle, I knew it was a film I wanted to see. I mentioned the movie to my husband, who laughed as he read its synopsis. “So basically it’s a movie about your life?” he asked. When I saw that the movie was based on a memoir, I decided to pick up the book first. And while the details are eerily similar in many respects, Jeannette Walls has had a life much wilder than mine has ever been.

Jeannette Walls is the second of four children. Her father was a brilliant man who taught her and her siblings about math and science but also brought terror on them through his alcohol and gambling addictions. Their mother was an artist, but loved her art to the neglect of her parenting responsibilities. Together, her parents were a toxic combination that formed instability and turmoil for the children. They constantly moved around, living in poverty because of their parents’ choices.

In this memoir, Jeannette details moving from town to town and finally settling in her father’s hometown, where they bought a tiny house that was falling to pieces. Even in their poverty, their father believed that they would be able to build a castle out of glass one day. He carried the floor plans they had created for this castle, and the members of the family constantly added to these plans. In the backyard of their tiny, broken down house, the children dug a foundation for this castle under their father’s direction. However, life’s hardships required them to eventually fill it with trash. It is under these poor conditions that Jeannette and her older sister began to make plans to move to New York and start their lives apart from their parents.

One of the most powerful parts of this memoir was Jeannette’s recollection of her tenth birthday. Her dad took her outside to ask her what she wanted. He said he would get her anything, even if he had to die trying to get it.

Her dad pushed and begged her to tell him what it was that she wanted. Nothing was too big.

Finally, she told him: “Maybe you could stop drinking.”

I was driving to work as I listened to this part of Jeannette’s story, and I began to sob. Big, ugly tears. How many times have I wished that my own father might give up his addictions, for me? Oh, as an adult I know there’s so much more to addiction than selfishness. People use drugs and alcohol to numb unimaginable amounts of pain, but find themselves trapped by their addictive powers. But as a daughter, I want my dad to be my dad again. Sober.

Jeannette’s wish is heartbreaking not just because a ten-year-old girl wished for her dad to be sober for her birthday, but because that’s the wish of so many of us.

Skip the Movie and Read the Book

I ended up watching the movie, although my husband and I waited until after I read the book. There were a lot of things I liked about the movie, but I loved the richness of the book so much more.

The movie jumped around a lot more than the book did. While it probably made enough sense without having read the book, I felt like there were so many things in the movie that were underemphasized. Things that were important in the book seemed to be background images in the movie.

While my husband (who didn’t read the book) really liked the “present day” timeline in the movie, I did not. I felt like the time spent on it could have been used to make more sense of the things that happened in the book. Multiple stories from the book were combined into single scenes, making them lose their punch. For example, Jeannette’s birthday wish was turned into a plea for her dad to stop drinking when he returned home drunk one night.

That doesn’t mean there weren’t parts that touched me, though. One scene brought me to tears. Several others seemed to take on new life because I saw the film version. While I don’t think the movie is a complete waste of time, if you had to choose one or the other I highly recommend the book.

Writing – The writing was great. It carried the feel of the people and the story well.

Story – The story was intensely compelling from start to finish. While the last little bit seemed a little slower than the rest, it was still interesting and brought a feeling of resolution. It was a story that made me want to keep reading.

Mature Content – There was a lot of profanity (mostly used in quotes of Jeannette’s father). There was a fair amount of violence and gruesome depictions of the effects of alcoholism and poverty on a family. Jeannette also describes a few sexual abuse experiences, although not graphically.

Likability of Author – Jeannette was likable as I read this book. Occasionally her nearly-blind support of her father was frustrating. However, that support is understandable considering the bond between parent and child.

BONUS Audiobook Review – I always love when the audiobook is read by the author. It was great hearing Jeannette Walls read this book. It added extra life to the story hearing the inflection exactly as she intended it to be.

The Glass Castle is an emotional and rewarding read, especially for adult children of alcoholics. I personally found it to be especially cathartic as I worked my way through Jeannette’s story, finding myself having many of the same emotions and experiences that she has had. This book was well-written and had a story that kept me interested throughout. Of the books I’ve read so far this year, this one may be my favorite.