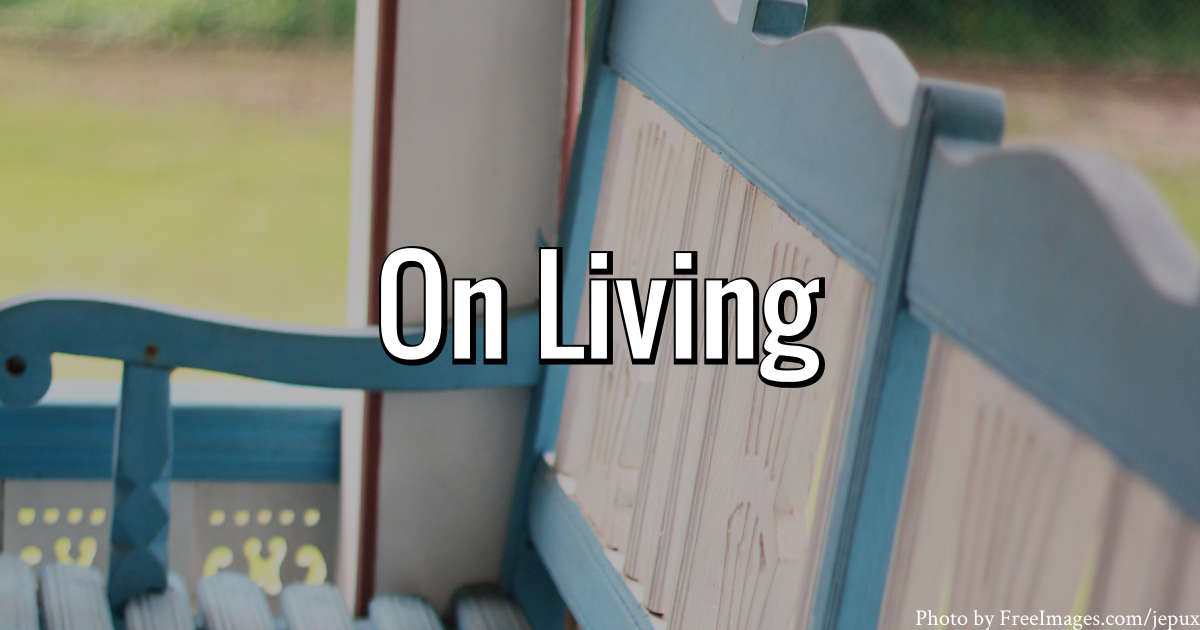 After my friend Darbi sent me this article on Kerry Egan, the author of On Living, I quickly added the book to my “need to read” list. Because of my calling and desire to train to become a hospice chaplain, the insight from another female hospice chaplain was one that I could not pass up.

In On Living, Egan reflects on the patients she has cared for and her personal growth during her years as a hospice chaplain. Some of her stories are terribly heartbreaking. One young man was so crippled and unable to speak that Egan could not bring herself to visit a second time and was haunted by her failure to return like she had promised him she would. Another man dying of cancer held onto hope he would receive a transplant that would never happen.

Despite the heartbreak she experiences at work, most of her work is enjoyable or mundane. Because of the perception that working with “the dying” is morbid, friends are reluctant to hear her stories from work. However, she often has funny stories that are appropriate to share, even at parties. She once received criticism from an acquaintance about the validity of chaplaincy being an actual job after she explained what she had done that day. In reality, many days are mundane: talking to patients about family and being present with them. Despite how others may feel about her job, chaplaincy is an important part of end of life care.

Kerry Egan’s beliefs were very different than my own.

Despite finding this book enjoyable, I found several areas of disagreement. The biggest were her beliefs on salvation. Egan is a Christian chaplain, yet she criticizes the belief that you must be “saved” in order to have a relationship with God. While it did not appear to be her intention, she does seem to poke fun at Christians talking about the day they were saved. She said that when she wants some of the Evangelical patients to have a better day, she asks them to tell her about the day they got saved. She said it is always interesting to listen to, even if she doesn’t agree with it. When another patient said she was the reincarnation of Joan of Ark, Egan wrote that she could not say for sure reincarnation was not real. It left me with a lot of questions about what exactly she believes.

The other major area I felt Egan and I differed was in our beliefs on angels and demons. She had one patient who claimed to be possessed by a demon. Egan wrote that she sympathetically listened to the patient. She then provided spiritual resources for her, despite the fact she knew demons weren’t real. After the patient had her exorcism, Egan believed in demons, but her unbelief in them beforehand was strange to me. Later, when a patient told her that every person was assigned a guardian angel at birth, Egan pretty much wrote, “Yeah, that seems possible.” While I think it’s possible she started to realize that those nearing death might know things she did not, I found her sudden belief strange.

Despite theological differences, I found many positives in On Living.

She wrote about the gray area that all chaplains have to live in. I was able to get a feel for the balance that a chaplain has to have in order to do the job. Although I have thought about it on occasion, reading about her experiences and some of the services she has provided for patients with beliefs different from her own has really allowed me to think about what I believe and how I will balance those beliefs while serving those within my care. Chaplains live in a gray area, and that’s okay.

Another major positive that I found was that she shared her regrets with readers. The story of the man so crippled from an accident that she did not want to be near him was horrifying. Yet it made me think about times that the pain of others has made me uncomfortable. Just as she did, I learned the importance of being present with others in the worst of pain. I do not want to regret leaving someone in the throes of pain.

This book is not what I was expecting it to be. I was hoping for someone more theologically similar to me. Despite our differences, though, Kerry Egan’s On Living is a very touching look into the life of a hospice chaplain. A few uses of profanity aside, she writes excellently about life among those who are dying. The stories within its pages will make you laugh and cry. Kerry Egan’s On Living is a good book about a unique job.