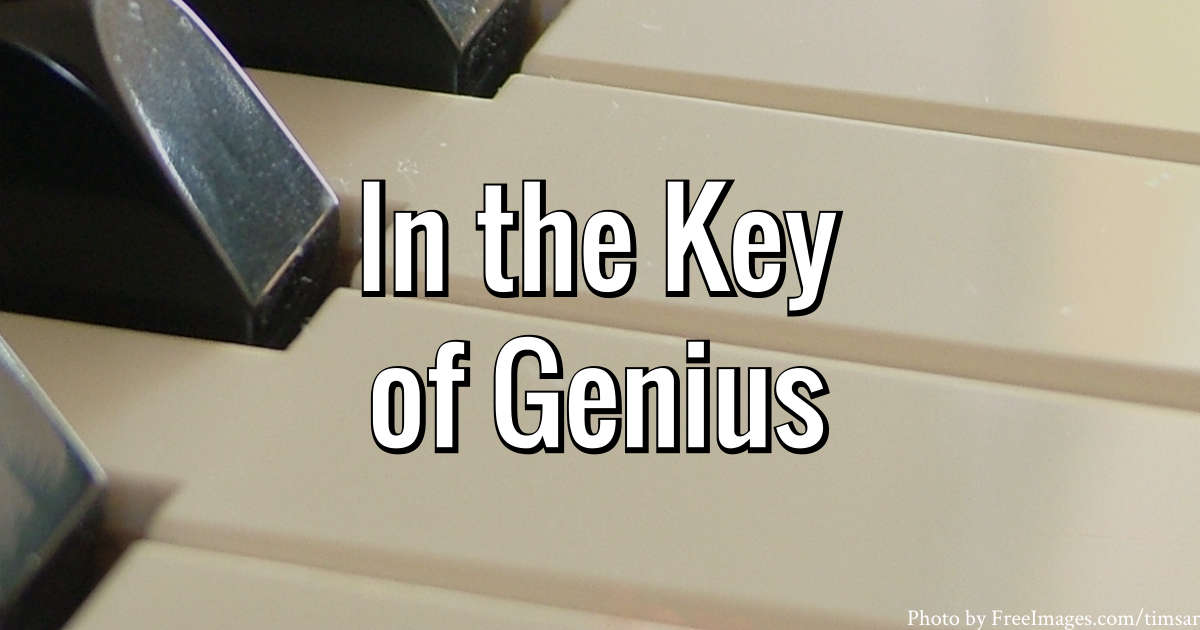 Against all odds, Derek Paravicini developed an extraordinary skill for playing the piano. Born premature, the treatments that saved his life also left him blind. Learning disabilities that left him largely non-verbal in his formative years also made teaching him a challenge. In the Key of Genius is his story as told by his lifelong piano teacher, Adam Ockelford.

After Derek’s mother had already had several miscarriages, she was not hopeful that her premature twins would survive. After labor, the doctors laid aside both children, assuming they were dead. When a faint crying was heard from one of them, they jumped into action, saving Derek’s life. Unfortunately, the oxygen therapy they used to save his labored breathing caused him to lose his eyesight. The family had a woman they called Nanny help with Derek’s extensive care needs. Realizing his need for playthings with sound, Nanny moved a keyboard into the nursery. By the time he was two, Derek’s seemingly aimless playing turned into music. Members of the family began to recognize the tunes he was playing. They were amazed by the skills this toddler displayed in front of a keyboard.

“How could it be that this little boy, just over two years old, totally blind, virtually unable to speak and apparently able to understand very little of what was going on in the world, had taught himself to play the keyboard – something that she couldn’t even do herself?”

When it came time for Derek to begin attending school, he visited Linden Lodge School for the Blind in London, where he met Adam (the author). Although Derek did not attend Linden Lodge for a couple more years, Adam began to tutor him. Derek’s unique mix of disabilities made him a challenge to teach, but Adam wanted to nurture his natural musical abilities. Despite some hesitancy from his mother, Derek took his first major concert at the age of nine. He received opportunities to appear on TV and in documentaries. As Derek outgrew Adam’s scope of abilities, Adam helped find tutors to stretch him. Adam helped Derek grow into the gifted pianist he is today. Derek now travels around the world and performs for varied audiences.

Derek had an incredible genius for music.

Although there is sheet music with raised notes so that those who are blind can read it, Derek listened to songs and then reproduced them from hearing alone. He learned them over long periods of time, filling in the pieces as he became more familiar with them. Once the song was in his long term memory, he could recall it to perform for listeners. Derek memorized thousands of songs, all of which he learned by ear only.

Derek’s disabilities only made what he accomplished musically more extraordinary.

Without any of his disabilities, his musical accomplishments are extraordinary. If a person with perfect sight and no learning disabilities learned to play the way he did, they would be praised for their talent. Adam Ockelford stresses throughout the book that Derek is not a “blind pianist” but a “pianist who is blind.” Leading with his gifts instead of his weaknesses is important.

Derek and Adam’s story reminded me of the importance of long-term mentoring.

At the point of publication, Adam had been mentoring Derek for nearly two decades. He was not just Derek’s piano teacher, but a dear friend to the family who helped Derek in all areas of his life. Adam helped position Derek’s career as a concert pianist. He worked with Derek through very turbulent years. When Nanny grew ill, he took Derek to visit her for the last time and then helped him after her death.

While I certainly won’t mentor someone into becoming a concert pianist, being a mentor like Adam is something I have a strong desire to do. Pouring into the life of another person and nurturing them to be their very best could add richness to my life. I have mentored some students over shorter periods. But the idea of mentoring someone over a period of years, or decades even, is exciting. The potential for growth on both our parts is extraordinary. There would be challenges, but the growth would be worth it.

This was a great story with good writing. It was a quick read, which was especially nice after reading a few longer books. While there was some heavier content, there was also a lot of humor sprinkled in, keeping the pace and the tone of the book overall easy to read. My only real complaint were a few strange features in the writing, like several places where the author used two of the same word in a row, like “that that.” Other than that, it was well-written and enjoyable.

Do you have a mentor? Do you mentor someone? Share your stories below!