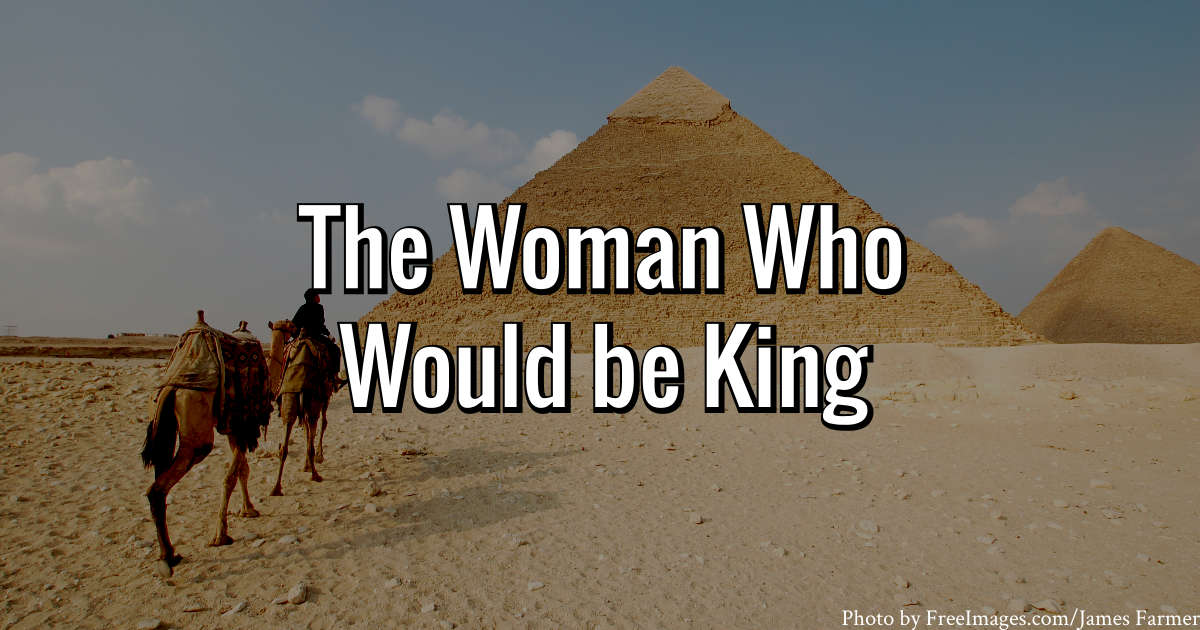 Female leadership, especially in ancient times, is a strange thing to some people. I discovered this book when I saw a former professor of mine post about it on her Facebook page. When I read what it was about, I immediately wanted to read it. As a female undergoing the requirements to become a pastor and chaplain (often thought to be a man’s role), stories of women who have successfully led despite gender bias are of particular interest to me.

When you hear the name “Hatshepsut,” it does not conjure up any images. Her name is not a household name (for good or for bad) like the few other women who led in ancient times. If I were to say “Jezebel,” you may not be able to tell me exactly what her story was, but you would know at least that she was a woman with power who did not use it in a positive way. Hatshepsut had more power than any woman of her time could dream of having, but is easily forgotten because her life did not end in scandal. While she shrewdly positioned herself to gain her power, she did not kill her relatives or use her sexuality to gain it.

“Hatshepsut has the misfortune to be antiquity’s female leader who did everything right, a woman who could match her wit and energy to a task so seamlessly that she made no waves of discontent that have been recorded.”

Hatshepsut was the daughter of the king, Thutmose I. She married her half-brother, Thutmose II, who ruled only a short time. Unable to produce a male heir to the throne, it would have to go to the child of a “lesser wife,” a son by the name of Thutmose III (really, I’m not making this up). While this boy who was still a baby grew, Hatshepsut took the place of queen-regent, a role usually reserved for the mother of the king. In the seventh year of this role, she had the people crown her king. Thus, she and the young Thutmose III both ruled as co-kings, something that had happened in Egypt in cases where an older king wanted to teach a younger king how to rule before he passed on. Though theirs was an unconventional rule, Hatshepsut cleverly used the conventions of Egypt to provide herself with as much power as possible.

Hatshepsut sacrificed her femininity in order to rule well.

Throughout the pages of this book, it was painfully clear that Hatshepsut changed who she was to please the people she ruled so that she could keep the power she held. While she acquired her power by emphasizing her ties to her father and her divine role in the Egyptian temples, there is evidence she may have struggled to keep her power as the young king grew older.

The earliest statues she had made of herself show her in a woman’s dress with the king’s clothing over it. She is smiling slightly, and her figure is feminine. Over time, though, the statues that she has created portray her as more and more masculine, until her statues are identical to those of her co-king Thutmose III.

“She may have been king, the most powerful person in the ancient world, but beliefs and expectations greater than she was forced her to perform unending ideological gymnastics to satisfy the sacred role. In the end, Hatshepsut had no choice but to change her outward appearance.”

For me, this was the most heartbreaking part about reading this book. While she may have suffered a lot of other things that may fall to speculation, it is abundantly clear that she changed her portrayals of herself. She may have even changed the way she actually dressed to please the people that she was leading. While I am not entirely advocating dressing however you want whenever you want, I find it hard to swallow that often the way women find they can fit into leadership roles is by making themselves appear more like men. There have been times that women I care for have been asked to wear subdued colors only when serving in leadership roles in ministry. While I am fortunate that in my context I have not faced any criticism for how I dress (bright yellow and all), I know that my situation may not always be that way.

“Hatshepsut’s story can help us appreciate why authoritative women are still often considered to be dangerous beings who need to be controlled, monitored, contained, and watched.”

I am not the type of person who writes about how unequal or unfair things are for women very often. Things have improved for women a lot in the last fifty years, and in the United States women enjoy a lot of freedoms that we wouldn’t be able to enjoy in other countries. However, it is foolish to deny that we do not view women in power differently than we do men in power. Women using a strong tone of voice while speaking are viewed as hysterical or unhinged while men may just be viewed as passionate. Women posing the same questions or making the same comments in a meeting may be seen as being nags, while men are being diligent. Women sometimes face more scrutiny for their mistakes and may be criticized for not balancing their home and work lives better. These things may not always be the case in all places, but some women face even worse than these bad perceptions. Despite this, women like Hatshepsut still lead. Women will continue to seek leadership positions at all levels and in all fields. My hope is that we will be able to lead in a way that is authentic to who we really are in a world who will accept us for what we have to contribute.