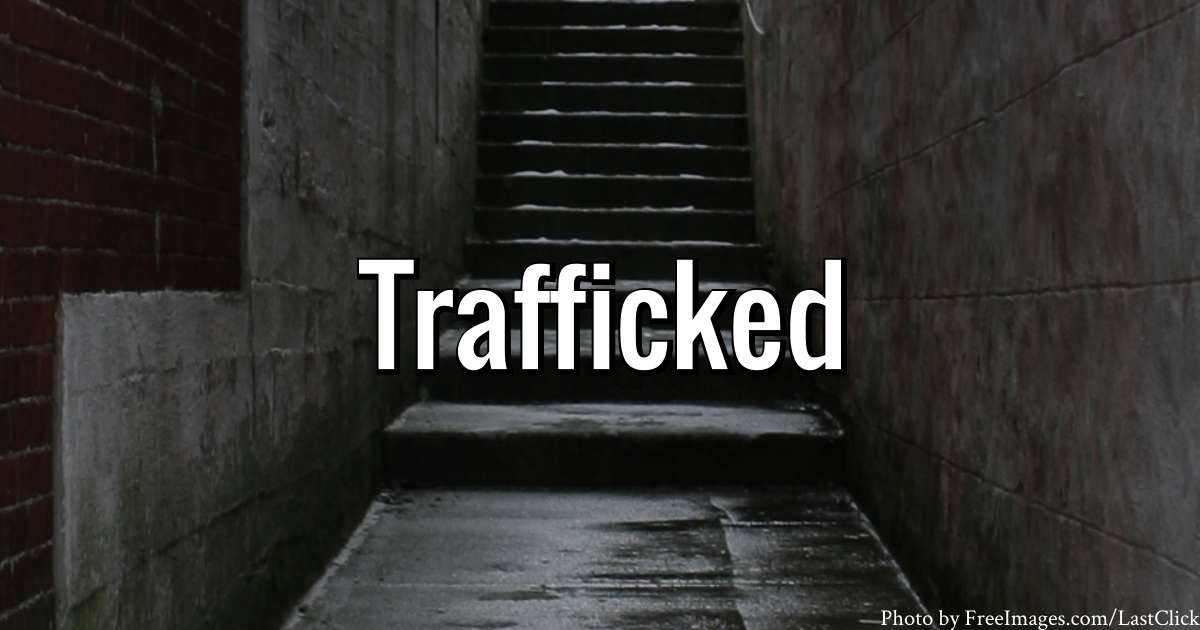 Trafficked is the haunting story of a young woman who is forced into prostitution by a close friend. This book had me so engaged that I finished it in two days. However, those two days were quickly followed by several nightmares because of some of the scars I carry from an abusive relationship in my late teenage years. I only suggest reading further in this post, as well as the book itself, if you have not been in one of these relationships or you are emotionally prepared to read things that might be upsetting to you.

For four years, Sophie’s friendship with Kas was perfect. He was kind and a great listening ear. They had one awkward conversation when she started dating another man, when he also confessed his love for her. But other than that, things were great. After breaking off her relationship with her boyfriend and having emergency surgery on her stomach, she was invited to go away on vacation with Kas to Italy. They began a relationship, and after the first night of their relationship, he told her he was in debt and she needed to help him. He told her that if she really loved him, like she said she did, she would sell herself as a prostitute to help him make back the money he owed. When manipulation did not work, he physically threatened her and her younger brothers, making it clear to her that she had no choice but to work for him on the streets.

“I knew people didn’t say things like that in real life, but however much I tried to tell myself it was all some elaborately cruel joke, I knew in my heart that I’d made a huge and potentially fatal error when I’d allowed myself to break my golden rule and trust him.”

This was an emotional read because of my connections to it.

No, I was not forced into prostitution by my abusive boyfriend. But he did exhibit many of the same abusive patterns that Kas did. He was charming and charismatic (at first) to lure me into feeling safe in the relationship. When he lost his temper over something, he always found a way to make it my fault. When I took the blame to try to make peace with a situation, though, he would play the self-pity card. Everything that he did was to control my emotions and my behaviors. Where emotional manipulation alone didn’t do the trick, physical and sexual abuse further degraded my self-worth to the point where I believed no one else would want or believe me.

“I never spoke unless Kas spoke to me, and when he asked me simple questions that I couldn’t answer–usually because I was too anxious to be able to focus my thoughts–I told myself he was right and I was becoming more stupid with every day that passed.”

Sophie struggled during and after her ordeal with feeling as if the entire thing were her fault. In the same way, I struggled after my abusive relationship. I knew logically that it wasn’t my fault. Emotionally, I could not process how I could let myself fall into such a relationship. Others who spoke harmful words about the relationship after the fact only did things to damage my view of myself. Although I had many people who were overwhelmingly supportive, some were not. Louder than any of those voices, though, was the memory of his voice saying things meant to tear me down. Even after years of counseling and four and a half years of a happy marriage later, I occasionally think of some of those things he said that destroyed my self-confidence.

“I know that if someone told me that what happened to me had happened to them, I’d feel sorry for them and wouldn’t blame them for one moment. Even so, I still felt as though it was all somehow my fault.”

One last thing I found as a point of connection with Sophie was the struggle between telling people about the trauma I endured and not telling them. Sophie did not choose to tell many people about the abuse and trafficking she endured, and struggled to explain some of her fears and behaviors to her coworkers and friends. While I have tried to be fairly open about my past, it is still hard to explain why certain things can completely unnerve me. I can come completely unglued if someone touches me on the knee or leg. If anyone looks like the boyfriend who abused me, I am wary of that person even if I know it isn’t logical. Certain foods make me feel physically ill because I have only ever eaten them with him and his family. Although I do not think about him often, those fears and scars linger and can come back in an instant.

“Not telling people can make things difficult, though–for example, when I overract to something and can’t explain why, such as the time someone at work fired a toy gun at me and I fell on the floor with my hands over my head, screaming.”

Sophie Hayes was an educated woman with a family who loved her. She was in her twenties with a stable job and an apartment. By most measures, she was not an ideal target for human trafficking except that someone she cared about took four years to groom her. He then lured her out of the country and threatened her younger brothers. He convinced her that he had people working for him everywhere and that he could see everything she did. She was afraid of her customers, strangers, and even the police.

Several times she was brought in by the police, who treated her like a criminal. They were convinced that she was doing this on her own free will, and made her life on the streets even more difficult. Although prostitution is a crime, she wishes that they would have asked questions that would have helped her feel safe to share what was really happening. She wishes that they would have recognized the signs that she was being abused and trafficked, and sought to get her home to her family. It was not until she was so sick that she went to the hospital instead of “work” that she ended up making contact with her family and getting rescued out of the life Kas had forced her into living.