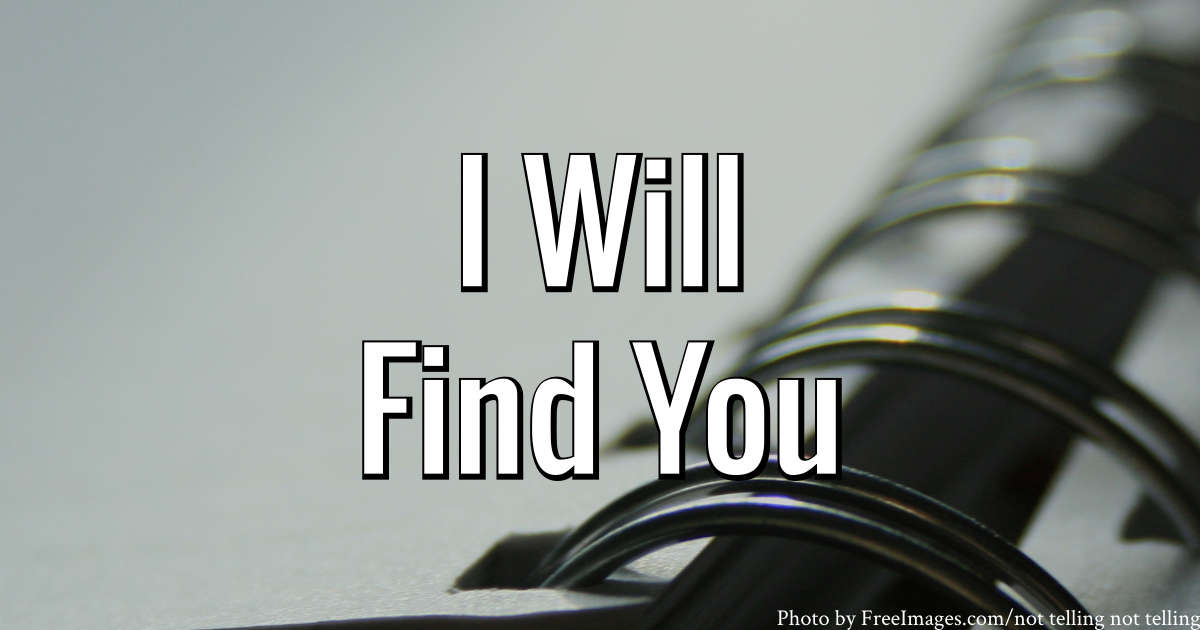 I Will Find You is a compelling and well-written memoir about a journalist’s journey to find out what brought her and her rapist together on the day of her attack. Joanna Connors writes her heartbreaking tale about how her rape changed the way she lived for over twenty years.

Joanna was thirty years old when she was raped by David Francis at a University theater where she had gone to get a story as part of her job as a journalist. It was by catching a glimpse of his tattoo that she was able to give a compelling description to police. They were able to catch him a day later returning to the scene of the crime. He was convicted and sentenced to thirty to seventy years in prison. But even with her rapist behind bars, Joanna went on to live in fear. A year after the rape, she had her first child with her husband. Unintentionally, she hovered over her two children excessively, afraid that they may fall into harm’s way.

After a college campus visit with her daughter, Joanna realized that she needed to put her fear to rest. She would find David Francis and find out what made him into a rapist. Although he told her that he would find her (a thought that once filled her with dread), she was now determined to find him. She gathered the court documents from her trial. Among them, she found his records and found out he had died several years prior. Although she was relieved that she would not have to face him, she also knew that she would not have all of her answers. Joanna found out that David and his siblings had been abused terribly by his father. This abuse, along with an older man willing to mentor David in crime, may have been contributing factors in David’s outcome.

Joanna powerfully reflects on the journey many survivors go through.

I found myself echoing so many of Joanna’s thoughts and words throughout her story. Although our stories are very different, the emotional toll it took is similar. Joanna is one of the rare cases of a rape committed by a stranger, while my abuse was carried out over a period of nine months by someone I knew. Yet there were several times that her reflected thoughts could have easily been my own.

Joanna reflected throughout the book about her guilt over the rape. She wrote that she blamed herself, even though she would have never blamed someone else in her shoes. Her guilt intensified when the attorney prosecuting her case asked her why she went into the empty building. When I opened up about my abuse, an adult I trusted said, “I thought you were smarter than that.” When they said these things, it only confirmed what we were already thinking: “This is my fault.”

Joanna also reflected on the fearfulness she felt after her rape. Because of this, she developed a fear of everything around her, to the point that she could not function like she did before. While years of counseling have made that fearfulness less constant in my life, there are still times when I feel afraid for reasons I cannot explain. Men I do not know sometimes make me wary. I startle easily. I’m fortunate that the fear lessens over time, but when it is there, it is very apparent.

Joanna wanted to find out what made her rapist the way he was.

Instead of writing David Francis off as a “bad man,” Joanna wanted to find out what made him the way he was. On her journey, she found out about the abuse he endured at the hands of his father. She found his two sisters, both of which had also been rape victims themselves. Joanna found that in his vulnerability, David was mentored by an older criminal and jailed as a juvenile. In jail, it is possible that he himself was sexually abused.

While not all people who are abused become abusers themselves, those who commit these crimes have often been hurt terribly by other people. Although it is merely anecdotal evidence, the young man who abused me had been abused terribly as a child. I believe that the abuse he endured could easily have been the reason for his actions against me.

I Will Find You is a very powerful book. It is very emotional. It also has mature content. Joanna Connors spends a chapter going into detail describing her rape, so I would not recommend this book for younger audiences, sensitive audiences, or for recent survivors of sexual assault. Additionally, there was some language throughout the book. It was a very good look at one woman’s journey to find answers about what made her rapist into the man he was. As a survivor myself, I enjoyed the rawness of her reflections of what it looks like to cope with a sexual assault.