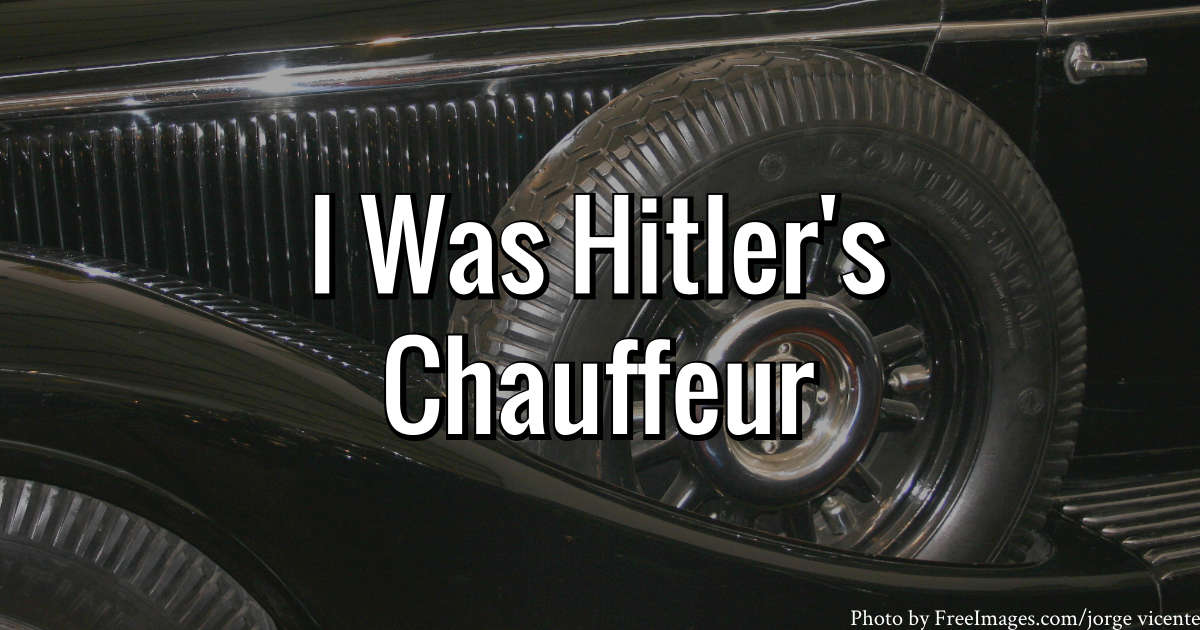 I Was Hitler’s Chauffeur is a fascinating alternative look at one of the most hated men in history. In his memoir of his time in service to Hitler, Erich Kempka reflects on the work he did and the man he thought Hitler really was.

In his twenties, Erich Kempka became one of Hitler’s drivers. After some time in his service, Kempka gained Hitler’s trust and moved up in rank to become his primary chauffeur. It was in Hitler’s service that Kempka got a closer look at the man Hitler was. Kempka shares several stories of Hitler’s kindness to him. Often Hitler would bring a snack along for Kempka to make sure he had plenty to eat on longer rides. When Kempka’s father died, Hitler showed compassion and care for his grief.

Kempka, who wrote his memoir in 1950, stood in alliance with his employer. His support of Hitler’s work is apparent throughout the pages, although any mention of the violence done in his name is conspicuously absent. Kempka’s memoir is not without a villain, though: Martin Bormann, who he believes manipulated and used Hitler’s kindness for political advancement. After Hitler’s suicide and the end of the war, Kempka writes that time will likely show that Hitler’s biggest flaw was that he was too trusting and too kind to those who would use him.

Was Hitler saintly, evil, or somewhere in the middle?

Kempka was a devoted follower of Hitler. After his cultural upbringing and then having Hitler treat him so well, one can hardly blame him for his devotion to Hitler and his causes. However, Kempka paints Hitler as a saint who did everything he did for the sake of others, rarely thinking of himself. Unlike Kempka, history has painted Hitler as one of the most evil men to ever live. Hitler’s kind actions toward those who followed him confuse a “black or white” look at the man we know to be responsible for so many deaths.

Kempka viewed Hitler as a hero.

He believed that Hitler truly cared for those around him, and for his country. While I read some passages with skepticism, he wrote about kind things Hitler did in response to hardship. For example, in one situation Hitler had heard about an area that had been suffering from hunger. He ordered that a large amount of grain be sent there for relief. My skeptical brain thought, “Yeah, but did you actually see the grain get delivered, Kempka?” However, Kempka’s belief in Hitler’s kindness in response to suffering was steadfast.

In the end, he believed that Hitler’s biggest flaw was how trusting he was. He watched as Hitler was manipulated by Bormann. After Hitler’s suicide, Kempka mourned him as a hero.

Hitler was responsible for the deaths of millions of people. Children who draw swastikas get in trouble because of the evil that the symbol represents. Nearly a hundred years later, we are aware of the damage that was done.

Reading about Hitler being kind is hard for a modern reader who knows about the evil that was done by Hitler. Every time I read about something kind Hitler did, my mind could not process it. My brain either pretended it was someone else or thought he was manipulating the person he was interacting with.

When I was talking to my (incredibly smart) husband about this, he reminded me that even evil people are good to their friends. “Isn’t that in the Bible?” he asked. We ended up discussing it some more, and it makes sense. And it is, like my husband asked, in the Bible. In Luke 6:33 it says, “And if you do good to those who are good to you, what credit is that to you? Even sinners do that.” Hitler being kind to those in his care was necessary for him to gain influence and loyalty. Even an evil man can do good to those who do good to him.

Though evil, Hitler was human.

It is easier to paint Hitler with a broad brush and say he was all evil. I want to do that. And it would be so much easier for me to do that. The millions of lives he took make me want to stamp him with that label. However, like all of us, Hitler was still human. Although his evil was greater than the evil of most people we will ever hear about, to elevate him to a superhuman position is to give him more power than he deserves.

“Only later generations will be able to form a precise assessment of this man.”

Hitler was a real human. He fell in love and got married. His employees worked for and loved him. Hitler gained their loyalty by his kindness toward them. While we cannot lose sight of the fact that his kindness was in the context of a greater evil, we also cannot lose sight of the fact that a man as evil as Hitler was capable of kindness. I like to believe that the capacity for kindness that Hitler had means that those who commit evil deeds today are equally capable of kindness. Perhaps then there is also hope of rehabilitation for the most evil men and women of our day, since Hitler’s time has passed.

I Was Hitler’s Chauffeur was an enjoyable read for a very different perspective. While I did not read the appendices, they are supposed to add additional historical and political context. Although some of the longer, German words made it slower to read, that is less of a problem except where it occasionally impacts comprehension and speed. While I am never going to say that Hitler was a good man, this was a good book to stretch me outside of my comfort zone. It forced me to humanize a figure that I have seen as superhuman for so many years. Because of this, I highly recommend it to anyone who loves history or anyone who is interested in stretching themselves.

What most surprised you about Hitler from Kempka’s memoir? Leave your thoughts in the comments below! 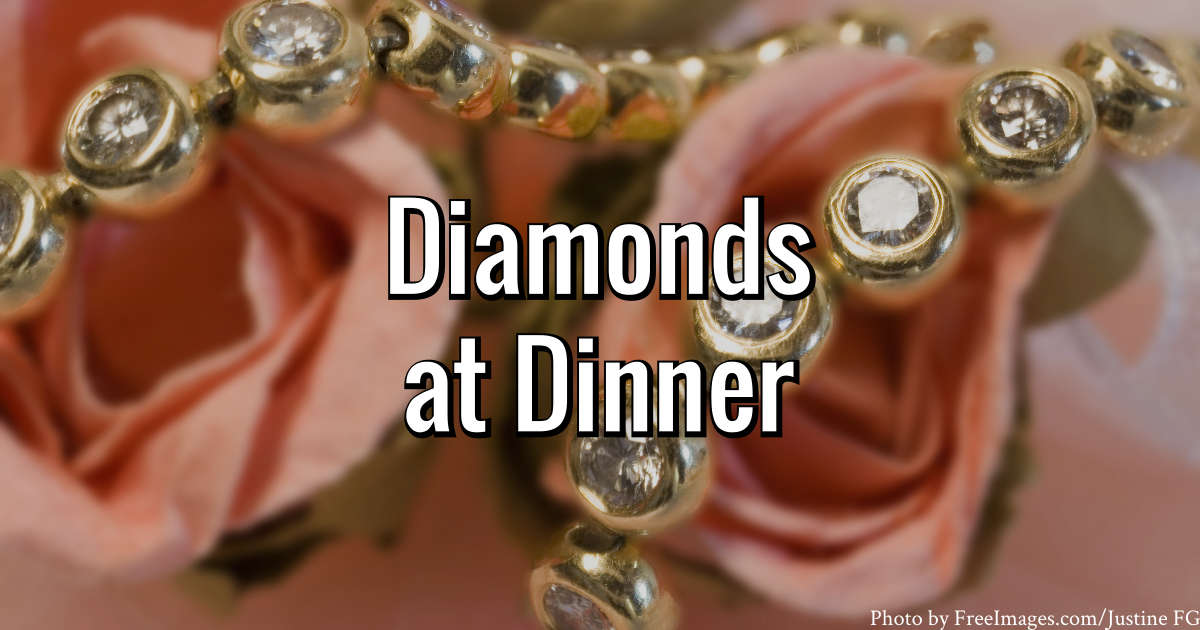 Within a few pages of starting Diamonds at Dinner, I was captivated by the story that author Hilda Newman laid out. Throughout the pages of this memoir written at the age of 97, she reflects on the memories of her early adult years working in a stately home as a lady’s maid.

In her early teenage years, Hilda’s family helped her get an apprenticeship with a seamstress. After paying the fee to allow her to learn from the seamstress and studying under her for four years, the seamstress died suddenly. At the age of nineteen, with full training as a seamstress but no job, Hilda began to work at a hotel. A friend mentioned that with her training she might make a good lady’s maid for one of the aristocracy. Intrigued and excited about this idea, she talked to her parents and wrote letters to two ladies hiring lady’s maids. When one wrote back and eventually hired her, she went to live at Croome Court. There, she became the lady’s maid for the Countess of Coventry, Nesta Donne Phillips.

She found the work to be difficult, although her new employer was kinder than many others. Despite some harsh reprimands, Hilda felt that she and the Countess had built up a bond. She even believed that the Countess had a fondness for her. When the Countess had gotten into an accident, she asked only to be attended to by Hilda while they waited on the doctor. At Christmas, Hilda received a broach from the Countess. Unfortunately, the second World War meant the end of Hilda’s working at Croome Court and the closing of that chapter in her life.

Hilda Newman’s memoir may be one of my favorites that I’ve read in a long time.

I will admit that historical biographies are not typically my favorite. If there are too many dates and names, I feel my eyes glazing over. However, this memoir captured my attention and had me enthusiastically chatting about it to my husband. While I tell him about the plots of most of the books I read, I frequently found myself saying, “This is one of the best books I’ve ever read!”

Finally, after having said that for about the fiftieth time, my husband asked exactly what made it so great. After reflecting further, I believe that four things made this memoir especially good:

If you are looking for an interesting read about those serving the English aristocracy in the 1930’s, Diamonds at Dinner by Hilda Newman is the perfect book. It is a charming story written by a lovable woman about a very interesting time in history. Even though it handles issues like poverty and war, it does them in a clean and dignified way, making this book suitable for teens as well as adults. Best of all, the reader does not need to sacrifice good writing for good content in this book. It really is one to read.