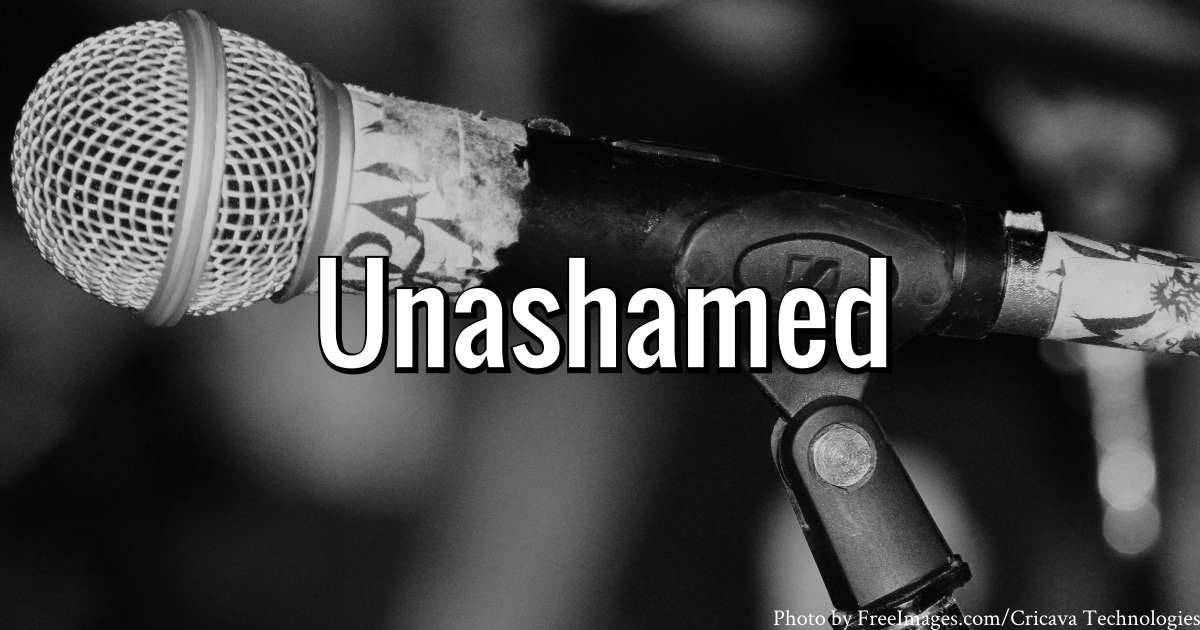 Unashamed is the powerful testimony about God’s transforming work in the life of Christian artist Lecrae Moore. Lecrae writes about growing up without a father, his mistakes, and his transformation into the artist he is today.

Lecrae was abandoned by his father, who he never met. His mother worked hard to provide for him. Because of the emptiness left by not having a father figure in his life, Lecrae looked up to rap artists and uncles who were not always good influences on him. After being molested by a babysitter, he gained a distorted view of sexuality. He used drugs and women. However, he earned a full scholarship to college for theater and continued his lifestyle on campus. It was there that he had to opportunity to go to a conference where he accepted Jesus as his savior.

“I’ve had to learn that my natural responses aren’t normal, that the only way to live a future that’s better than my past is to cling to God in the present.”

Unfortunately, in his zeal he also became legalistic in his approach to his relationship with God. He believed he could do enough good to wipe away all of the wrong things he had done. When he started to slip, he gave up. He began a sexual relationship with a woman who got pregnant with his child. Not wanting to be a father, he told her to get an abortion. Not long after that, they separated and he continued his lifestyle. After checking into rehab, he realized his need for God’s grace. He moved in with a Christian friend and turned his life around completely. It was then that his career as a Christian artist began to take off.

Lecrae’s abandonment by his father severely impacted his life.

Lecrae hungered so much for a male role model that he clung to any male who invested in his life. Even the rap artists he listened to became role models to fill the void his father had left. The emptiness he felt left him eager to prove himself to everyone.

Even after becoming a Christian, the scars from being fatherless still remained. While they were not being filled with drugs and women, the hunger for approval was still there. The lack of a father in his life impacted the way he saw God as a Heavenly Father.

“Because I felt like my dad valued drugs more than having me as a son, I’ve constantly wrestled with my self-worth and craved the approval of others.”

Although I was not abandoned by my father, my complicated relationship with my father has also left its scars on my life. It has left me starved for male role models. I often crave words of affirmation from the older men in my life, especially those I have labeled as role models. Words of criticism can be taken as outright attacks. However, I have been able to work through some of these issues because I am aware of them. As I read Lecrae’s story, I connected with his emotions. I found his honesty about the journey to be healing.

Lecrae has learned to become “okay” with the tension his music creates.

Lecrae’s testimony and his outspokenness about being a Christian have led to him being labeled a “Christian artist.” While a lot of his music does talk about things related to Christianity, he has started taking a direction away from being overtly Christian in his music in order to reach more people. His conviction is that in order to reach people, he needs to be an artist who is a Christian instead of a Christian artist. He wants to write music that will speak to the boy he was growing up so that he can allow doors to be opened to conversations about faith.

“Being an outspoken Christian in the music industry means always feeling out of place. It’s like whatever you have accomplished is less credible because of your faith. You’re in the circle, but you’re not really in the circle. You fit in, but you don’t really fit in.”

While Lecrae is never going to fit in with the non-Christian crowd, he’s also been shunned by some segments of the Christian crowd as well. When he began to shift his focus in his music to follow his convictions, he did not communicate with his fans what his intentions were. Some fans accused him of chasing money. Others claimed he wasn’t a Christian anymore. And although the path he believes God has put him on has left him in a place of tension, he is staying there.

Unashamed is a powerful and emotional memoir. It is an absolute must-read for fans of Lecrae. Even for those who are not his fans, I highly recommend it because of the powerful testimony that he writes in this book’s pages. This book contains mature content like sexual abuse, drugs, and abortion. However, Lecrae handles his past mistakes and his background in a tactful away. His book gives readers a raw, yet redeemed look inside what life looks like for a young black man in America. Overall, this may be one of the best books I have read in a long time.