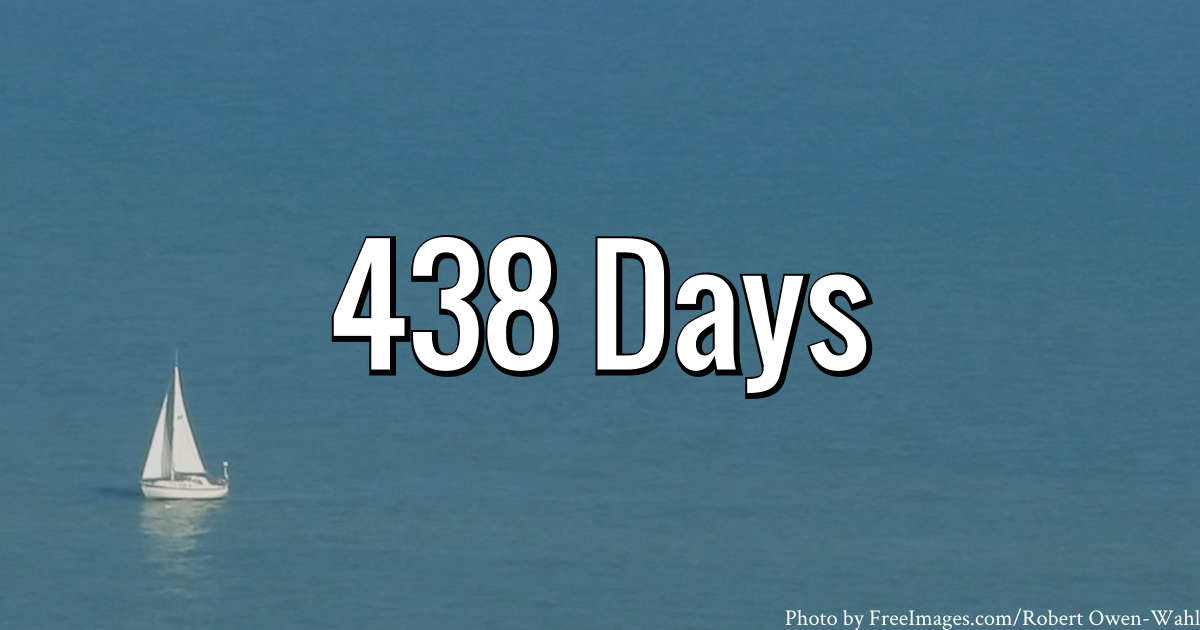 When the cover of the book 438 Days says, “an extraordinary true story of survival at sea,” it is not an overstatement. Salvador Alvarenga, a deep sea fisherman, survives fourteen months at sea in a small fishing boat. Although this story made me want to vomit at times, it might be one of the most inspirational books I have read in a long time.

Alvarenga and Cordoba were both deep sea fishermen. Alvarenga had decades of experience, and young Cordoba had only a couple of years of experience at sea, much preferring not to go too far out to fish. During a storm, Alvarenga looked for someone to go out to finish hauling in a catch, and ended up hiring Cordoba for the job.

However, during this storm (which was a common occurrence in the area of Mexico where they fished), they lost use of the engine. When they radioed for help, their GPS, which was not waterproof, was ruined, so they could only give a visual account of where they were, about twenty miles off shore, with no motor or sails. Right after their desperate plea for help, the radio died, and they were pushed further and further out to sea. Despite a three day search, they were not found.

Four months into their journey, Cordoba slowly died of starvation. After eating a bird that had a poisonous snake in its stomach, he was too frightened to eat any more birds, a necessary part of their survival diet. Despite Alvarenga’s pleas for him to eat, he refused. He begged Alvarenga not to eat his body, and then died. Alvarenga spends days speaking to his dead friend as if he was alive, despite his friend’s body turning purple, then black from exposure to the hot sun. After several days, he slipped his friend’s body into the ocean. As I read this, I was sad for the loss of Cordoba and relieved that Alvarenga did not consume his friend’s body.

“He considered scratching messages or a count of full moons on the inside of his home but both ideas felt like capitulations etched by a dying mariner. Alvarenga planned on telling his survival story in person.”

Alvarenga spent the next ten months in complete isolation. In order to survive, he had to do some disgusting things: drink turtle blood, eat raw birds and fish, put urine in his ears to treat an ear infection, and eat the organs of animals for essential nutrients.

Although the journey took an immense toll on his emotional health, the previously non-religious Alvarenga took the time to pray, impacted by the faith of the deceased Cordoba. He also vowed not to kill himself, desiring to be an encouragement to those contemplating suicide. He believed that if he could survive the time he spent at sea, he could encourage others not to kill themselves because of situations they might find themselves in.

More than anything, though, Alvarenga kept going because he wanted to be reunited with the daughter he had abandoned years earlier when she was only one year old. At the end of his journey, he thought about the thirteen years he had not been a part of his daughter’s life because of a gang feud that caused him to flee, as well as his desire to party and enjoy life. None of that was as important to him as a relationship with his daughter.

After thirteen months at sea, the biggest blow to his psychological health was being very close to a large boat and not being rescued. Three men on the boat even waved to him, seeing him clearly, yet did not attempt to rescue him at all. This event sent him into a deep depression. Had he not hit land less than a month later, his health likely would have deteriorated even further.

The best part of this story is that it has a happy ending. Alvarenga reached a very remote island, where a couple who did not speak his language extended great hospitality to him, despite their limited resources and their fear he might harm them (he is, after all, holding a knife when they find him). He was then transported to a more populated island, where he could receive medical treatment, and was asked questions to verify whether his story was true or false. The media picked up his story and he was overwhelmed by the media interest in him.

He was eventually taken home to his daughter and parents, where he was able to rebuild that relationship. He took a trip to the town in Mexico where he used to fish, so that he could talk to his previous employer about what happened. He also talked to Cordoba’s mother, letting her know about Cordoba’s last days. His health continues to improve, as does his relationship with his daughter.