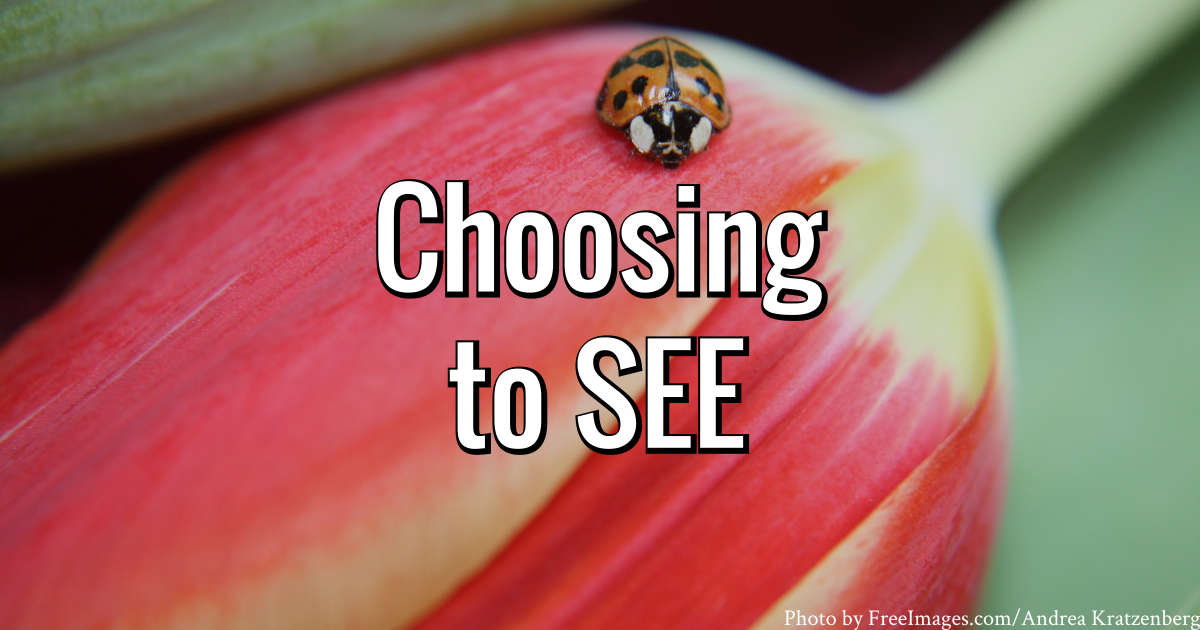 Choosing to SEE made me both laugh and cry more than any book I’ve read in months. Mary Beth Chapman shares her story of life as the wife of famous Christian singer Steven Curtis Chapman. She writes about the accident that took her daughter’s life and the grief that followed. Her exploration of life’s ups and downs is both hilarious and heart-wrenching.

Mary Beth met and married Steven in college, before his music career took off. Choosing to focus on his music, they moved to Nashville. There, they had their first child. It was after they began having children and Steven’s music career began taking off that Mary Beth saw a psychiatrist for her crippling depression. She was diagnosed with clinical depression and put on Prozac. Despite its stigma in Christian circles, treatment for her depression allowed her to be a better wife and mother. Their family grew to six children: three naturally born and three adopted from China.

On May 21, 2008, Mary Beth’s 17-year-old son Will pulled into the driveway of their home and accidentally hit their five-year-old daughter Maria. Despite efforts to save her life, she passed away. Throughout the pages of the book, Mary Beth paints a picture of grief in its rawest form. She writes about the shock, the pleading with God, and the anger. Her story also shows the amazing work of God in the lives of the Chapman family, despite the tragedy of May 21.

When I was diagnosed with bipolar disorder, fellow Christians said some very damaging things to me. One friend said, “If you had more faith, you wouldn’t have bipolar disorder. And it’s funny, because your name is Faith and you don’t have any.” The stigma around my illness and my own denial about its severity led me to go years without treatment.

Yet it has been as I’ve grown in my faith that I’ve realized the difference between actual sin in my life and an illness I cannot control. Medication has been the best decision I have made for both my mental and my spiritual health. Now that the medication has put to rest many of my bipolar symptoms, I can clearly see areas of my life that I need to work on. I get angry too easily. I complain more than I should. Without being deafened by the ups and downs of the illness, I can hear God’s voice in my life a lot more clearly.

Mary Beth’s reflections on clinical depression as an illness reminded me a lot of my own experience with bipolar disorder. She wrote about how it’s an illness like any other physical illness. While she would love to be healed of it someday, Prozac helps her to live a healthy and happy life. She also is able to use her position as a prominent Christian figure to bring light to the issue of mental illness. Perhaps someday the stigma surrounding mental illness, especially in the church, will be gone.

Mary Beth grieved honestly and gracefully, all while in the spotlight.

Mary Beth did not have the luxury of grieving in private. While a lot of her grief could be done privately, her family’s spotlight meant that she had the public’s eye on her. Throughout her grief, she worried about the impact the accident had on her other children, especially Will, who had been driving the car that hit Maria. She experienced the full range of emotions during her grief, but did not linger in extreme depression or anger.

“I still trust in the One who gave us Maria to love for such a short time, but I am also a person who trusts while doubting at the same time. I am just being honest. I pray to God that He would build my trust and that my doubting would turn to rejoicing in time.

The Chapman family used the spotlight put on them to glorify God. Although their grief was deep, they used every opportunity they could to bring good out of the situation. They went on to build and dedicate an orphanage in China, named after their Maria. The orphanage cared for disabled children and provided hospice care to those who were dying. Mary Beth used her writing to encourage those around her, despite her continued striving to live with the “new normal.” Through it all, the Chapman family did what they thought was right, despite their grief.

Choosing to SEE was a fantastic book. Mary Beth’s humor was evident throughout, although she tackled many difficult topics. She shared embarrassing stories that had me laughing out loud. Then within minutes, I found myself crying with her as she shared the grief her family experienced. I can honestly say a book has never made me cry so hard. While it may be because I remember hearing about the accident on the radio in 2008, I also think it is because of Mary Beth’s excellent writing. Outside of a few minor formatting issues in the Kindle version (several words did not have spaces between them), I struggle to find anything I did not like about this book. It was an excellent read that will bring you a full range of emotions.