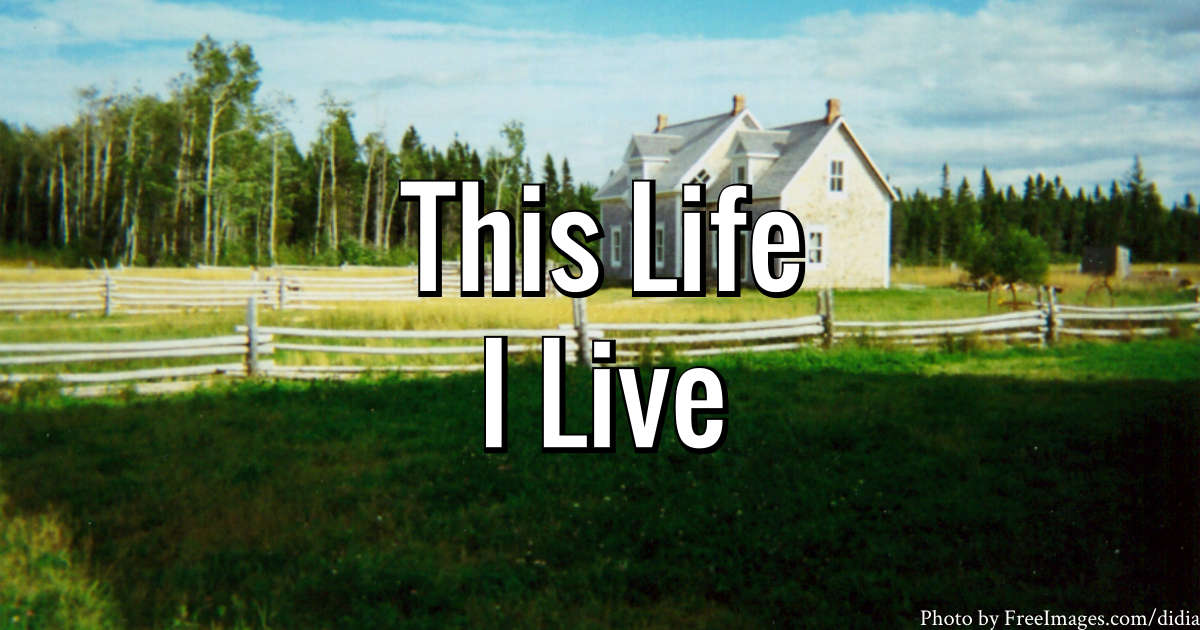 This Life I Live is the heartbreaking and inspiring story of Rory Feek and his wife, Joey. The husband and wife duo became popular in the country music industry, performing as Joey+Rory until Joey’s death from cervical cancer.

Rory was raised by his mother, with occasional visits from an absent father. While he never really thought of himself as poor, his family moved from state to state to avoid landlords collecting missed rent. Even from a young age, Rory loved music and wanted to create it. As a young adult, he had two daughters. Shortly after the second was born, their mother left him alone to be a single father.

For years he raised his daughters while building his name in the country music world. When his daughters were teenagers, he met Joey. After she broke off her relationship with another man, they began dating and married quickly. They eventually began performing as a duo. Then around ten years into their marriage, they had their daughter Indiana. Shortly after, Joey was diagnosed with cervical cancer. With treatment, she had a short remission. But after that remission, the cancer returned and Joey passed away in February 2016.

Rory’s childhood was not ideal. While his mother did her best, his father was absent most of the time. Even when he was around, he was a fairly incapable father.

One time, Rory’s father got him a guitar. Because of Rory’s budding interest in music and the poverty his family lived in, it was the most amazing gift he’d ever received. Even though it was a cheap guitar, he played it constantly and learned as much as he could. He was crushed, though, when his father asked for it back.

As Rory became a father himself, he took the lessons from his childhood and did his best to become a better man than his father was. Although there were times in which he failed his children in similar ways, he also found opportunities to become a better parent because he knew how he could do better.

Rory’s Inspiring Testimony of God’s Work in his Life

As a young parent, Rory knew about God. But he didn’t really know God. He went to church sometimes, but didn’t really have a relationship with God.

One day, he got on a bus and left town without telling his girls. He had gotten to the end of his rope and was overwhelmed with life. But along that ride, he had an encounter (that he explains far better than I can) in which he realized his need to get serious about his relationship with God. When the bus stopped, he bought a return ticket and headed home before his daughters realized he was gone.

“After a while I didn’t have to remind myself to make the good and right choices. I just started making them naturally. Because it felt so good.”

His relationship with God became a grounding point for his ability to love his children and his wife. It was a love that gave him the strength to face the hard road of Joey’s cancer diagnosis. Even though at the point of his dedicating his life to God he had not yet met Joey, that time and that relationship would give him what he needed to love Joey the way he did.

Rory’s Inspiring Love for his Wife

Rory inspired the world with his love for his wife as she was diagnosed with cancer and faced her final days. Her strength and positivity throughout her fight also encouraged and inspired fans.

Some friends and family members asked Rory if he was struggling with not being with Joey physically during the time she was fighting cancer (which, by the way, seems like a terrible question to ask a man whose is dying). There was speculation about his ability to stay faithful because of his unfaithfulness to the women who came before Joey.

But even in her last days and at her weakest, Rory didn’t feel the need to stray because she was still his wife and he still loved her. He loved her for more than her physical body. Rory loved Joey for all that she was.

This Life I Live is an inspiring and overall easy read. It was emotional and down-to-earth. Although it wasn’t stylistically spectacular, it wasn’t bad. It read like a country song and seemed very authentic to Rory’s voice. He wrote powerfully about growing up in bad conditions, becoming a better man, and loving his wife through her cancer diagnosis and death. Despite the fact I have not listened to Joey+Rory’s music before, this was still an amazing read. Fans will likely find it even more enjoyable.